Social Action-Social Justice Committee will be showing the film 13TH 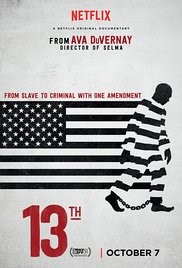 Ava DuVernay's Emmy award winning “13th" provides an in-depth look at the prison system in the United States and how it reveals the nation's history of racial inequality.

The film begins with the idea that 25 percent of the people in the world who are incarcerated are incarcerated in the U.S. Although the U.S. has just 5% of the world's population. "13th" charts the explosive growth in America's prison population; in 1970, there were about 200,000 prisoners; today, the prison population is more than 2 million. The documentary touches on chattel slavery; D. W. Griffith's film "The Birth of a Nation"; Emmett Till; the civil rights movement; the Civil Rights Act of 1964; Richard M. Nixon; and Ronald Reagan's declaration of the war on drugs and much more.

Open to the community